by Adi Robertson Oculus has announced a new prototype called Crescent Bay, another step towards the consumer version of its virtual reality headset. “It’s as big of a leap as we made from DK1 to DK2,” says Oculus CEO Brendan Iribe, referring to the first two versions of the Rift development kit. The new headset features 360-degree tracking, letting the […]

Oculus has announced a new prototype called Crescent Bay, another step towards the consumer version of its virtual reality headset. “It’s as big of a leap as we made from DK1 to DK2,” says Oculus CEO Brendan Iribe, referring to the first two versions of the Rift development kit. The new headset features 360-degree tracking, letting the Rift’s external camera track the back of the headset as well as the front, making it easier for people to move without feeling constrained by staying in the camera’s range. It’s supposed to have improved weight and ergonomics — “it is much lighter. Thank god,” says Iribe. And for the first time, it includes integrated audio. Crescent Bay was announced at the Oculus Connect developer conference in Hollywood, CA. 3D audio is something Oculus has stayed out of so far, but it’s a major focus of this Rift prototype, which is meant to make virtual reality more comfortable and immersive before it’s officially released to consumers. Crescent Bay will “allow for sustained presence,” says Iribe.

The first Oculus Rift VR headsets were shipped in the spring of 2013, but a consumer version has not yet been announced, and this emphatically isn’t one. So far, Iribe says that over 100,000 Rift development kits have been shipped to 130 countries, and the company is still filling pre-orders for its second-generation model. The Crescent Bay prototype follows “Crystal Cove,” which was first shown off at CES 2014 in January — the DK2, which is based on it, came out a couple of months later. 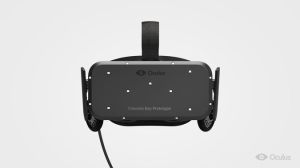 Oculus and Samsung announced their Gear VR mobile headset earlier this month, and Iribe believes mobile and desktop VR will ultimately complement each other, not compete. Oculus created its first real in-headset user interface for the Gear VR, and it’s now said that it will be releasing a mobile app for VR games. Oculus product VP Nate Mitchell says that its current online games catalog (not yet a real store) has seen 699,000 downloads since launch. As part of today’s presentation, Mitchell also announced a new demo from longtime partner Epic Games (which Iribe says is “as close to Call of Duty as I want to get”) and a partnership with development company Unity, which will support the Rift as an official platform on its free and paid versions, removing a major barrier to making VR games.

The Crescent Bay prototype (which we’re told is still quite fragile) will be available to try at Oculus Connect, and we’ll be bringing you impressions later today. And Iribe has been talking up not just the upcoming developments but the long-term future of VR. “You can create unbelievable worlds. You can create believable worlds,” he says. “After all, this is just the beginning.”