Considering Buying Destiny? Here’s a Better Way to Spend $60 on Your PS4

by Matt Whittaker There’s no doubt that Destiny is the biggest game of 2014. It’s captivated the gaming ecosystem, essentially forcing the world to pay attention to its offerings. However, while Destiny’s gun-play is some of Bungie’s best, and its RPG elements are downright addictive, this shared world shooter is not without its flaws. The MMO elements can be an […] 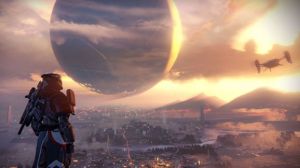 There’s no doubt that Destiny is the biggest game of 2014. It’s captivated the gaming ecosystem, essentially forcing the world to pay attention to its offerings. However, while Destiny’s gun-play is some of Bungie’s best, and its RPG elements are downright addictive, this shared world shooter is not without its flaws. The MMO elements can be an annoyance, the menu navigation system is immersion-breaking, and let’s not even get started on that story. Yes, Destiny is a great game, but if you have sixty hard-earned American dollars in your pocket and a shiny new PlayStation 4, you can certainly get more value elsewhere. Here’s a better way to spend $60 on your PS4 without buying Destiny:

Transistor, the sophomore effort from Bastion-creator Supergiant Games, is beauty in motion. Boasting one of the most captivating narratives of 2014, this unique RPG has the power to capture players’ hearts as well as their minds. Those who fully commit to Red’s story will find it nearly impossible to tear themselves away from their televisions. Transistor’s unique combat system, which combines real-time action with time-stopping turn-based elements, is nothing short of gripping. Add the fact that experimenting with its highly customizable ability system enhances both the gameplay and the story, and you have a bona fide winner. For one-third the price of Destiny, you can have access to one of 2014’s best games.

One feature Destiny certainly lacks is the ability to play through the entire campaign as Laser Beam Jesus. All custom ship jokes aside, Resogun, Housemarque’s PlayStation 4 launch title, remains one of the best games on Sony’s newest console. In a world where an increased emphasis is placed on narratives and cinematic elements, Resogun reminds us that excellent gameplay still reins supreme. Save all of the humans, go for a new high score, or simply create ridiculous ships for the world to download and enjoy. It’s easy to spend dozens of hours in this cylindrical world, especially if you’re willing to go the extra mile and try for Resogun’s challenging Platinum Trophy. The best part? Resogun will only set you back fifteen dollars, one fourth the price of Destiny.

It wouldn’t be that outrageous to argue that Child of Light is best-looking video game of all time. Think of its art-style as the best watercolor painting ever done with the charm of a Roald Dahl book cover sprinkled on top. Likely the best title to come out of the much-heralded UbiArt Framework, Child of Light is essentially a playable fairy-tale. With a surprisingly emotional story and unique dialogue told in iambic pentameter, it’s shocking to think that this was published by the same company as Assassin’s Creed. Oh, and the Grandia-style battle system inserts a bit of energy into the generally slow-paced world of turn-based combat. You could buy a new copy of Destiny, or simply download Child of Light and keep forty-five dollars in your pockets.

If you haven’t at least given Hotline Miami a shot, you’re doing video games wrong. While its right at home on the PlayStation Vita, the recent PlayStation 4 port gives players the chance to play this outstanding title in a current-gen setting. This psychological top-down action game, set in 1980s Miami, is easily the PlayStation 4’s most masochistic title. Enemies will die. You’ll die. EVERYTHING WILL DIE. For all of it’s rage-inducing challenge, there’s a real sense of accomplishment that comes with each perfect run. With the highly anticipated Hotline Miami 2: Wrong Number on the horizon, there is no better time than the present to play the original. For a meager Alexander Hamilton, this is an absolute steal.

So there you have it folks. For the same price as Bungie’s high-budget hit, you can have an eclectic mix of phenomenal games, each of which is better than Destiny. We, as gamers, have more options than ever before, so why not take advantage of them? Can you come up with a better way to spend $60 on PlayStation 4 software? Let us know in the comments below.