by Matt Fernandez via Variety

The “Tomb Raider” series of films and action-adventure video games follows British archaeologist Lara Croft as she solves puzzles and shoots her way through swarms of bad guys to uncover ancient treasures. The “Tomb Raider” Twitter page posted an announcement by Square Enix that “a new Tomb Raider game is coming” and that the company will share news about the game next year. 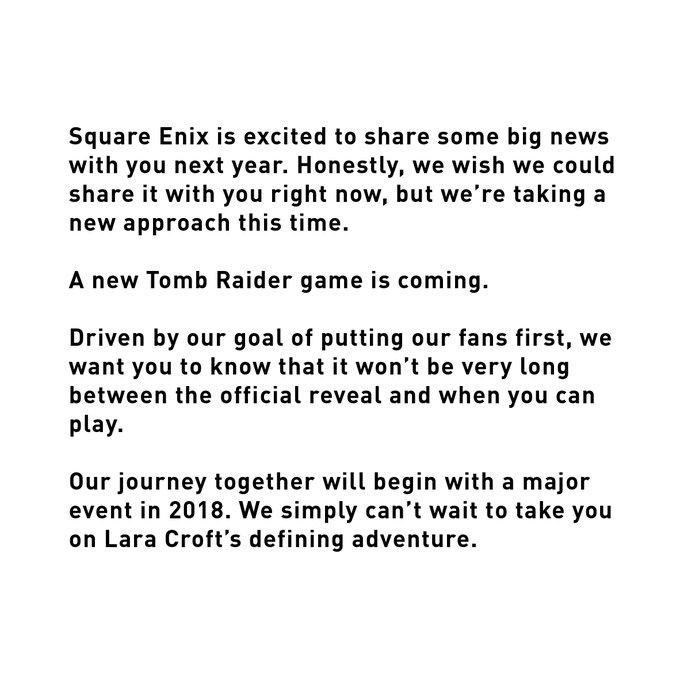 “Honestly, we wish we could share it with you now, but we’re taking a new approach this time. Driven by our goal of putting our fans first, we want you to know that it won’t be very long between the official reveal and when you can play,” said Square Enix. Though traditional video game marketing tends to begin well before a game’s release date and follows a project through its development, this new approach looks to shorten the gap between the game’s official reveal and its release date.

The tweet also indicated that the game’s announcement would coincide with “a major event in 2018,” likely the upcoming reboot of the “Tomb Raider” reboot film starring Alicia Vikander as Lara Croft that will be released on March 18, 2018. Angelina Jolie previously filled the role in “Lara Croft: Tomb Raider” and “Lara Croft Tomb Raider: The Cradle of Life.” The “Tomb Raider” franchise has been around since the first game was released in 1996, and was rebooted in 2013. Though an official title has not been announced, a leaked image in 2016 suggests that the new game could be called “Shadow of the Tomb Raider.”