by Cooper Hood via Screen Rant Dave Bautista is pursuing the lead role of Marcus Fenix in the Gears of War movie. The so-called video game curse has resulted in some lacking entries into the genre, but it hasn’t stopped studios from trying to succeed. There’s plenty of future adaptations in the works, including one for The Coalition and Epic Games’ big […]

by Cooper Hood via Screen Rant

Dave Bautista is pursuing the lead role of Marcus Fenix in the Gears of War movie. The so-called video game curse has resulted in some lacking entries into the genre, but it hasn’t stopped studios from trying to succeed. There’s plenty of future adaptations in the works, including one for The Coalition and Epic Games’ big screen take on Gears of War. The sci-fi war game has been a massive hit for the studio and Microsoft since the franchise launched in 2006, and there’s plenty more to come on the gaming side.

There’s also been plenty of interest in bringing Gears of War into theaters. Coalition announced a partnership with Universal at the end of 2016 to help get the film project moving. Since that point though, there hasn’t been a lot of news. The studios tapped Avatar 2 scribe Shane Salerno to write the script over a year ago, but nothing else has come to light.

If Gears of War is ever going to happen, it will need to secure a few more major pieces. The director will help shape the tone and style, but the cast will be a major factor in manufacturing further interest in the movie. It may be too early for casting at this stage of Gears of War‘s development, but Guardians of the Galaxy star Dave Bautista revealed during a Twitter Q&A with GameSpot that he’s eager to be involved and play the lead role of Marcus Ennix.

@DaveBautista I’ve enjoyed basically all the film’s you’ve been in and was a huge fan during your WWE run. What’s your dream role? I’m hoping they ask you to play Marcus Fenix in the Gears of War movie! #AskDave 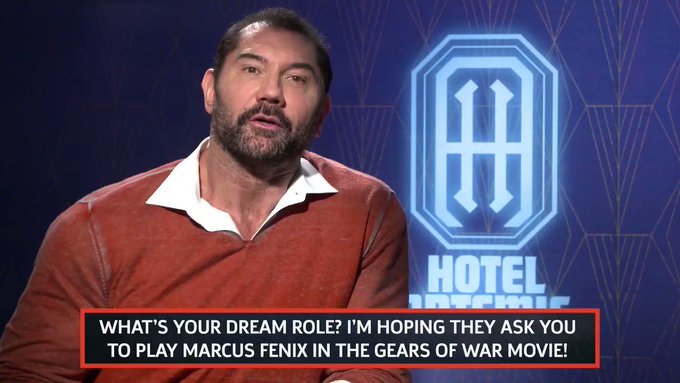 Bautista is best known for his role as Drax the Destroyer in the Marvel Cinematic Universe, but he’s expanded his filmography and range in recent years still. The former WWE star turned actor has appeared in major films like Spectre and Blade Runner 2049and can be seen in this week’s new release Hotel Artemis. Bautista could undoubtedly fill the action-heavy requirements that would come with this role, and he actually bares quite the resemblance to Fenix in the games.

While it is likely too early for Bautista to get cast, he would be a great fit for the role of Marcus Fenix. He was a soldier for the Coalition of Ordered Government prior to defecting, but later rejoined the COG as part of their last stand against the Locust Horde. Fenix goes on to have a huge arc centered around his family in the games’ sequels, which will continue in Gears of War 5. Bautista has shown he’s much more than the comedic character he plays in the MCU, so it’d be great to see him take on a major action role like this one. He’s yet to be a true lead, especially on this scale, but since Gears of War could assemble a great cast around him, Bautista is as compelling of a choice to play Marcus Fenix as anyone.