by Paul Tassie via Forbes At this point, Destiny fans have resigned themselves to an extended stretch of time without substantive content for the game. Last year at this time, Destiny’s first DLC, The Dark Below had already been out a month. Today, we don’t even have a hint of new paid content, only possible future “events” like the recent […]

by Paul Tassie via Forbes

At this point, Destiny fans have resigned themselves to an extended stretch of time without substantive content for the game. Last year at this time, Destiny’s first DLC, The Dark Below had already been out a month. Today, we don’t even have a hint of new paid content, only possible future “events” like the recent Festival of the Lost and the Sparrow Racing League.

These events have been mostly focused on adding new cosmetics to the game (Festival = Masks, SRL = Sparrows) and as such, fans have been brainstorming about what other new types of cosmetics might pop up in future events like the ones we’ve seen so far. I recently opined that Destiny needs its own Hearthfire-type expansion, focused on building a place for your Guardian to call their own (and to display all their sweet loot somewhere other than an ugly vault grid). Other fans have different ideas.

There’s one rallying cry I’m now hearing across forums, subreddits and social media alike, something that has been requested by fans from practically day one: Everyone wants the ability to re-customize the appearance of their character.

When you first designed your Guardian in Destiny, you had one chance to get it right. After that, you were locked in, and the only way to change your appearance was to stash your gear, delete your character, and re-level a new, prettier one. It sounds ridiculous, but I know many, many people who have done exactly this. 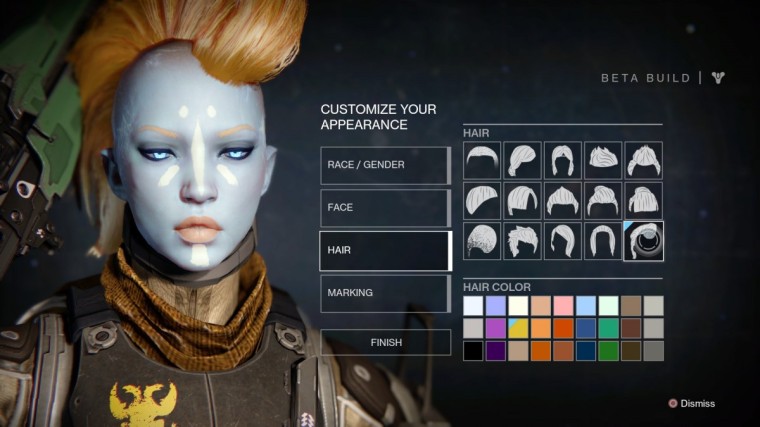 Now seems about as good a time as any for that to change.

Some fans just want a “barbershop” where they can at least change hairstyles. Others want the ability to change their character from head to toe, including face, race and gender. Given that your character has no name and rarely speaks, I don’t really think this is a huge deal from a lore perspective. After playing each story mission about thirty times over the past year, I don’t think your character has much more than a dozen lines in the entire game.

But from a technical perspective? That’s a different issue entirely, and one that could be somewhat difficult to overcome. It seems likely that there’s no character customization in the game post-creation because the hero is coded into the game and future cutscenes right after it’s made. We see this in other games, most famously in Mass Effect, which never let you go back and significantly alter your hero, but in others like Saints Row, you can change literally everything about your character at any time, even their race and gender.

Fans are hoping for a less restrictive system that the one they currently enjoy. After all, these Guardians are supposed to be carried with us for years, according to the grand master plan of Destiny. But not being able to second guess our creative choices from 2014…ever, is going to grow tiresome. It already is, for many people, hence how popular this request has become.

There’s another side to this, however. Given that this is cosmetic, and has no effect on gameplay, naturally that means it’s prime for Bungie’s newfound obsession with microtransactions. Why offer something for free when people will very clearly pay for it?

There are a few ways this could work:

1) Bungie charges a one-time fee of ~500 Silver to change the appearance of your character, allowing you to mess around with the existing creation options.

3) Bungie charges for both re-customization and these new options, having their cake and eating it too.

4) This was going to be an option where Bungie the benevolent adds a bunch of free new customization options and lets the redesign be free as well, but that’s too preposterous to consider at this point. With that said, I think I like option two the best.

This is a fairly significant money-making opportunity for Bungie, though I am wary of their recent microtransaction practices. I’ve seen some fans joke that instead of buying new accessories or a redesign, you’d get a “Barber Pack” that includes one random hair cut or a “Plastic Surgery Pack” that gives you one new random face to use. Spend that Silver until you get them all! It sounds absurd, but that’s exactly what’s happened with the Sparrows of the SRL.

I don’t think re-customization is a huge deal because unlike Mass Effect, you really are not staring at your character’s face that often (95% of the game you’re wearing a helmet or are playing in first person), and there isn’t even a consistent way to view your face up close the way you do in the initial creation mode. With that said, this is still something the game should offer as a service, seeing as how we’re stuck with these characters for potentially the next decade. I hope, at least, that in future content, your character will be more involved in cutscenes and get more of a personality, and when (if) that does happen, their appearance will become more important.

And the fact is that this is another revenue stream opportunity for Bungie. Even if it “should” be free, you’d be crazy to think that fans wouldn’t pay to redesign their character, or for new options like beards or tattoos. Bungie knows this, and at this point, they aren’t exactly leaving money on the table when it comes to expanding the microtransactions in the game.

The point is that all of this fits in with their new philosophy of selling cosmetics to raise revenue during the game’s “downtime.” Personally, I’d only even remotely think about spending Silver on a character redesign if there were some significant and cool new options for my Guardian. Otherwise, I have no desire to pay to re-do my hero using the same limited toolset we were given over a year ago. What about you?