by Dave Thier via Forbes The Xbox One continues to change. Microsoft’s flagship console is more or less unrecognizable from the machine it sold at launch, and that’s an eminently good thing. It might not be enough for it to catch up to the PS4, but it’s enough to save it from failure, something Microsoft should be pleased with. This trend […] 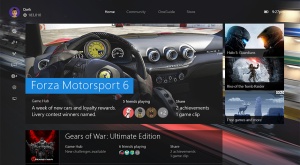 by Dave Thier via Forbes

The Xbox One continues to change. Microsoft’s flagship console is more or less unrecognizable from the machine it sold at launch, and that’s an eminently good thing. It might not be enough for it to catch up to the PS4, but it’s enough to save it from failure, something Microsoft should be pleased with. This trend continues, the company just detailed in a new blog post, as the machine gets its most significant update since it lost the Kinect and cut the price. Microsoft is promising a “completely re-imagined” Xbox One experience, and they’re finally fixing what’s been my biggest gripe about the actual system since launch: the interface. Just in time for Windows 10.

There was a time when Microsoft thought tiles were a really great idea: that time did not last very long. PC users were able to avoid Windows 8 by just skipping on back to Windows 7 before upgrading to Windows 10, but people with Surfaces, Windows phones or Xbox One’s still find themselves saddled with the company’s curious design choice. But aesthetics aren’t the whole problem with the Xbox One UI: the thing just doesn’t work very well. It’s slow, difficult to navigate, and much-vaunted features like gesture controls are more or less nonexistent. I found myself shouting “Xbox go to Xbox Video” at my console 10 times or so yesterday before giving up and using the controller. I had once succeeded in getting it to “snap” Xbox video, but this is not what I wanted it to do.

We already knew about backwards compatibility, probably the biggest single new feature of this update. But I’m very curious to see to what degree Microsoft can fix the seriously hobbled experience of doing anything but basic tasks on the Xbox One. Anyone who’s used a PS4 knows what a joy it is when smooth navigation between games, friends lists and other features goes well, and hopefully Xbox One can get in line with that next-gen feel. I’m not sure we’re getting it this time around, but I would love to see the return of that mini-menu you could get from pressing the center button the Xbox 360. That thing was great. Here’s Microsoft’s Mike Ybarra:

“As director of program management on the platform team at Xbox, I wanted to share an update of what to expect with the transformation in November. At Xbox, we put games and gamers at the center of everything we do. We are inspired by your passion and continue to listen to your input. The New Xbox One Experience will be powered by Windows 10, elevating the gaming experience on Xbox One. Integrating the speed of Windows 10, the New Xbox One Experience will get you to popular gaming features up to 50 percent faster. Instantly start a party, see what your friends are playing, and get updates to your recently played games from Home with no wait time. We’ll also be delivering your most requested feature – Xbox One Backward Compatibility.”

We’ll have more on the new interface once it rolls out, but until then, the Xbox One continues to be one of the most interesting things to watch in video games.