by Michael Thomsen via Forbes Over the last year, there has been much contention about who actually plays video games and what they want from them. A new survey by games research firm Quantic Foundry suggests that much of the vitriol and factional conflict comes from marginal groups at odds with the majority of people who play video games. Taken […] 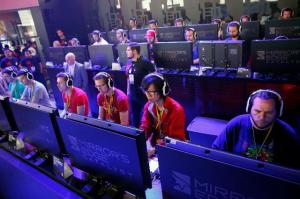 by Michael Thomsen via Forbes

Over the last year, there has been much contention about who actually plays video games and what they want from them. A new survey by games research firm Quantic Foundry suggests that much of the vitriol and factional conflict comes from marginal groups at odds with the majority of people who play video games.

Taken from a sample of 1,127 people, about half of whom were regular played massively multiplayer online games (MMO), 66% of agreed or strongly agreed that video games need to be more inclusive in terms of gender and ethnicity. Only 14% disagreed or strongly disagreed, while 21% were neutral. 69.8% of respondents were men, and the average age was 36.7 years old, a slightly above the ESA’s average game player age of 35.

The survey also undermined a number of common assumptions about games and gender, with 91% of respondents disagreeing with the proposition that women “biologically-wired” to prefer certain categories of games. 98% of respondents rejected the idea that video games should serve an “exclusively” male audience, and 85% affirmed the idea that relationships begun through online games can be as “genuine” as those started through face-to-face meetings. A plurality of respondents disagreed with the proposition that Facebook games aren’t “real games,” and 79% rejected the idea that Wii games aren’t “real games.”

The findings are an apt capstone to the last year or so of aggression and abuse directed mostly at women and trans people for criticizing video games’ uncannily homogenous characters and play styles. There was little unusual or offensive about the critiques, and it was largely a reflection of individuals performing services for the benefit of the community that major developers and publishers weren’t. The narrative justification for antagonizing those asserting their right to exist and participate on equal terms in the video game community was built on fear of infiltration from outsiders, people interested in violating the fundamentals of commercial games through an agenda of nepotism and identity politics.

Quantic Foundry’s findings suggest this reaction was indeed reflective of a relatively small group within the wider population of video game players. In part, this is due to the fact that people often talk about the home console industry and the companies that serve it as metonymic with the entire form. As the Electronic Software Association has long enjoyed pointing out in its annual survey of game players, there are more than twice as many women over the age of 18 who play video games than there are boys 18 and younger. The average age of women players is 43, eight years older than the average male player. Though the survey regrettably doesn’t acknowledge trans people, the split between men and women is nearing an equilibrium point at 56% men and 44% women.

These statistics seem surprising in part because the console games industry often feels excessively male-centric, something that’s helped create an anomalous culture of desperate over-identification with a narrow and self-replicating set of experiences. There’s an economic logic underwriting all of this, with the console games industry’s profitability founded on the mania of abandonment, machines that have almost all been sold at or close to a loss in order to profit from games licensing. This has created a culture of perpetual doubt about the sufficiency of the present, something that needs regular proving through testimonial and the displacement of present needs toward future products—the unannounced game, the exclusive for a system you don’t own, the sequel that’s even better.

For years Activision has been the world’s biggest games publisher—though it was finally passed this spring by Warner Bros.—with annual revenue in 2013 topping $4.8 billion driven in large part by 25 million units of Call of Duty: Black Ops II. By contrast, developer King.com had more than 500 million installs of Candy Crush Saga but earned only $2.4 billion in 2014. Angry Birds has been downloaded more than 2.8 billion times over the course of its life, and 600 million times in 2014, reaching a group of players far beyond console favorites like Grand Theft Auto and Call of Duty, yet the company made only $169 million in 2014.

Though these companies operate on dramatically different sales models, the larger point is that even the most popular and well-regarded console games reach only a small minority of the overall gaming population. Yet, the degree to which the values and aesthetics of console games have become interchangeable with games culture as a whole has distorted several generations understanding of what games and play are. This has left us with a socially alienated group of consumers encouraged to think they represent a majority that must defend some fundamentally valuable culture that would be lost or diminished through accommodation of others.

The debate about inclusiveness in games thus rests on the assumption that there is something innately valuable in video games, a supposition that becomes kindling for conflict, fueling antagonism by creating a social script of risk and embattled morality that becomes ironic fuel to keep all parties locked in a battle over consumerist identification for a particular subcategory from which only a small group of companies profit. In Time, Labor, and Social Domination, theorist and professor Moishe Postone glossed the Marxian idea that the “boundless strivings of capital and its narrow basis are tied to each other” in a kind of dream of “utter boundlessness, a fantasy of freedom as the complete liberation from matter, from nature. The ‘dream of capital’ is becoming the nightmare of that from which it strives to free itself—the planet and its inhabitants.”

In these terms, believing in the value of something that cannot be imagined separate from a process of industrial production, such as a video game, eventually leads one to a faith in the goodness of industry, which comes to justify itself by characterizing everything not industrially driven as a threat, a nightmare from an alien realm. This is a direct violation of the spirit of play, which depends on empowering people to continuously engage with one another in a performative negotiation over what should and shouldn’t be valued, an impulse that rewards curiosity and adaptability over dogma and discipline and cannot have meaning without an openness to all.

Play requires neither games nor video games. It should be of no surprise that people most interested in play also tend toward tolerance and recognition of those outside their own experiences. And it should be more shocking than it is that the companies feeding off that culture have made that attitude seem like an alien presence that must be beaten back at all costs.