by Paul Tassi Lately pre-order bonuses and console-exclusive content have frustrated many gaming fans who feel like they’re getting the short end of the stick when it comes to new releases, unless they pledge their loyalty to an unreleased game months ahead of time. But today with 2K’s upcoming shooter Evolve, we have a console exclusive, pre-purchase bonus that’s causing […] 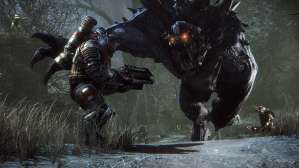 Lately pre-order bonuses and console-exclusive content have frustrated many gaming fans who feel like they’re getting the short end of the stick when it comes to new releases, unless they pledge their loyalty to an unreleased game months ahead of time. But today with 2K’s upcoming shooter Evolve, we have a console exclusive, pre-purchase bonus that’s causing something of a stir.

Evolve’s production has gone gold, and with that proclamation comes the now-mandatory open beta for the multiplayer game starting later this month. Ahead of that event, 2K and Turtle Rock have announced that Xbox One players who pre-order a digital copy of the game from the Xbox Live store will unlock instant access to the third tier of hunters in both the beta and the final release of the game, along with a new monster, the Wraith.

The major catch here is that a “pre-order” of a digital game in the Xbox store is really a straight-up pre-purchase, as you’re charged the full $60 for the game up front. It can be canceled any time ahead of launch, but it’s significantly more than the usual $5 GameStop down payment to be sure. Not to mention the very idea of pre-ordering a digital copy of the game now means we’re abandoning any pretense of logic regarding pre-ordering as a means to secure a launch copy of a game that might otherwise be sold out.

Past the concept of a pre-purchase, players are a bit perplexed about what’s actually being unlocked, and what it may say about the game itself. The core roles of the four hunters in Evolve never change (Medic, Assault, Trapper, Support), but as you go, different characters can be unlocked through enough gameplay. To get all the way to the third tier of characters requires a hefty amount of grinding, probably at least a ten hours per character class (plus the monster), if the alpha was any indication.

In other words, paying $60 up front is a free pass to skip a significant portion of what’s supposed to be the core progression system in the game. And compounding the strangeness of that, it’s an Xbox exclusive offer. The implication is that the grind is so bland and terrible, it’s an incentive to skip it directly with a pre-purchase. 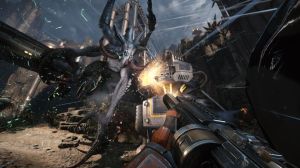 There are a few schools of thought about this. One is that all games should come with everything accessible and not restrict content for those unwilling to invest dozens or hundreds of hours to unlock it. The other is that progression systems create a tangible sense of progress and something to work toward, which is why Call of Duty’s prestige and unlock system is so popular. But in this case, it would be like if you pre-purchased Advanced Warfare on Xbox and you got to start at the third prestige level. It might not unbalance gameplay necessarily, but what’s the point in skipping that progression at all? It’s like admitting your grind is so boring that you’re willing to allow people to play less of your game, when the ones who are pre-purchasing are probably the most devoted to it.

Evolve has more than a few other kinks to work out besides this. An actual pre-order bonus that’s been announced, a fourth monster, seems like a pretty significant piece of content to lock away. Past that, the progression system itself appears as if it will be heavily skewed against new players, with advanced level bonuses including rarely seen perks like flat damage and defense increases, things other games have forgone for the sake of balance. This means matchmaking will have to be incredibly spot-on, or newer players will find themselves getting dunked on by veterans. I already saw a bit of this in the Alpha, and it seems like it could snowball badly if left unchanged. But I suppose that’s what an open beta should sort out.

Evolve just seems to be in a weird place ahead of its upcoming launch. One of my concerns with the game in the alpha was its relatively sparse amount of content. A bare-bones multiplayer focus can work, like with Turtle Rock’s last game, Left 4 Dead, or it can fall flat like we saw with Titanfall. Given its somewhat limited scope, it seems dangerous to allow players to A) skip progression, B) hold too much additional content as pre-order bonuses or DLC or C) have too many alphas/betas. That last item isn’t really a consumer issue, but more of a judgement call. I’d just worry about players burning out on the game before it’s even released, as that’s verbatim what happened to me after a marathon week with the Titanfall beta. But I suppose it does give players a solid look as to whether or not they want to purchase the full box copy at launch, and I can’t fault the transparency of that.

I am willing to give Evolve a pass on a lot of issues, because I would like to see an original IP with a unique core concept succeed. But they’re losing the narrative with all this pre-order, pre-purchase nonsense. If they’re confident enough in their game to offer lengthy alphas and betas, they shouldn’t feel the need to bribe Xbox players to skip playing the game itself as a pre-purchase bonus. No part of that sentence projects confidence, and it just seems like the latest annoyance in companies pushing pre-orders, and now even pre-purchases, too damn hard.