by Paul Tassi As I expected, I played a lot of video games over the holidays with family and friends around, and also as expected, I played most of them on the Wii U. While I’ve played games like Mario Kart and Super Smash Bros. previously, this was the first time I really got to experience them in full, surrounded […] 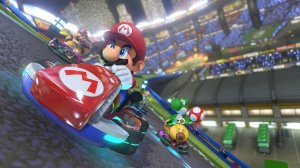 While I’ve played games like Mario Kart and Super Smash Bros. previously, this was the first time I really got to experience them in full, surrounded by other people on my couch. It reaffirmed the notion that Nintendo has produced some of the best games of the year between those two and Bayonetta 2, and the narrative that Nintendo “won” 2014, a year full of otherwise unfortunate news in the gaming industry, holds true.

Nintendo has stepped up with their exclusives in a way Sony and Microsoft MSFT +0.43% haven’t this year. In the endless amount of top ten lists you’ll see littering the internet this time of year, you’ll easily see Mario Kart, Smash and/or Bayonetta on many of them. But if you find more than one or two Sony/Microsoft exclusives, I’d be amazed.

I worry that 2014, good as it was for Nintendo, will be the year the Wii U peaked. The biggest games of any Nintendo console generation are almost always Smash Bros, Mario Kart and a new Zelda game, and we’re already at two out of three. Yes, Nintendo has many other well-known first party franchises, but those are the big trio, and after they’re out, it’s usually time to start looking ahead to the next system. With Zelda set to (supposedly) debut in 2015, that could be soon, and many are speculating that Nintendo will start talking new hardware shortly. I wouldn’t think this year, but maybe the next.

The way I see it, there are two ways Nintendo could go from here. They could come out with a new, solid piece of hardware that manages to catch them up to the PS4 and Xbox One in terms of power. Not because their current line-up of games looks particularly crappy on the Wii U, but because the relative lack of power combined with gimmicks like the gamepad have resulted in the Wii U losing almost all third party support. A system that could combine their stellar first party line-up with the cross-platform games Xbox One and PS4 share could be gamechanging, and kill the unfortunately true “released on everything but Wii U” meme.

But looking at history, I’m not sure how likely this is. For its last two consoles, Nintendo has been one step behind in terms of the power and scope of their hardware, and their lack of third party support is practically snowballing beyond redemption at this point. As much as I’d love to believe that Nintendo can magically produce a Super Wii that brings them to the generational level of the PS4 and the Xbox One, I’m not sure that will happen.

Rather, the other option is for Nintendo to simply focus on software for consoles rather than hardware. Because the third notion, making another unnecessary, underperforming console, in my eyes, isn’t an option.

I love Wii U games, but I still don’t understand the Wii U itself. From a purely technical perspective, it’s outright worse than its competitors, from horsepower to online capabilities to a hard drive that has less storage space than most of my USB sticks, and can hold about a game and a half before filling up. And that’s the larger version.

But past that, there has been nearly nothing to demonstrate to me why I am better off playing these great games on a Wii U rather than another system. The gamepad was supposed to convince me of this, pitched as a unique way to play, but instead, if anything, it’s a deterrent to the system and even Nintendo hasn’t made good use of it in the biggest games of the year.

When you tap the touchpad of the gamepad screen while playing Smash Bros, the match disappears and you see a simple readout of character portraits and damage percentages in its place, something that adds exactly nothing to the game itself, and actually takes away information. Mario Kart is a little better in terms of what it offers, a horn, a listing of who is in what place, and track map that shows where everyone is, yet it’s impossible to actually use. Looking down even for a half second to try and find data on the gamepad screen is an invitation to instantly hit a wall or wipe out in the game. In other words, trying to use the functionality actually prevents you from performing better in the game.

Past that, the gamepad has missed out on opportunities that should have been slam dunks for the concept. A Pokemon Snap reboot where the gamepad is used as a camera seems like a no-brainer, but a few years into the console’s lifecycle and we haven’t even heard rumors of such a thing. A third party game like Watch Dogs, where the central character uses a touchscreen to do most actions, still only relegated the real-life touchscreen of the gamepad to be mostly a glorified map.

Rather, what the touchscreen seems to do better than anything is drain battery life, as a constantly unplugged, lit-up device like that is bound to have a short fuse. For every one time I charged my Wii U Pro controller, I probably had to recharge my Gamepad four times. In general, the Wii U is incredibly controller-confused, allowing players to use two new-gen controllers, the Pro and the Gamepad, last gen Wiimotes, and now even last-last gen Gamecube controllers through an adapter. Some may appreciate that level of diversity, but to me it just makes the console look messy, and helped to contribute to the initial confusion about whether or not the Wii U was a new console at all. Even as late as last week, I found out I had a game-playing friend who thought the gamepad was originally sold as an accessory to the Wii.

The only real advantage I see for the gamepad is offscreen play when someone else wants to watch TV or play a different system. But outside of that? The point is that without a technically better system, and without gameplay gimmicks that actually contribute to games in meaningful ways, there is just no reason for the Wii U to exist. Nearly every point in its favor has to do with Nintendo continuing to make good exclusive games for it. That’s great, but again, doesn’t do anything to convince me that Nintendo wouldn’t make a hell of a software-only company unbound by lackluster hardware.

The original Wii succeeded because its gameplay gimmick worked. It was indeed a novel concept to swing a Wiimote like a golf club to hit a virtual ball, and the console quite literally became an explosive fad on the back of that tech (albeit a shallow system overall, in my opinion). And with Nintendo’s handheld scene, they’re in a different market position given that their only straight competition is tablets and smartphones, with the Vita barely making a dent comparatively in the space. But the Wii U, with its unnecessary gamepad and 3rd party desert, is being held afloat by a scarce few games alone, with almost no argument at all to be made for the hardware itself.

I don’t understand the comparisons to SEGA whenever this conversation comes up. While it’s true SEGA has fallen a long way since it made consoles, that decline is not directly attributable to their lack of hardware, nor is it a company that can be directly compared to Nintendo. You’ll be hard pressed to name more than one or two truly great SEGA franchises, but you can rattle off a dozen of Nintendo’s with ease.

In this day and age it seems like a tough sell to ask consumers to shell out for a technically inferior console whose sole benefit is the fact that it plays an exclusive strain of games. For as much as I enjoy my time with the Wii U, I can’t say I also wouldn’t enjoy playing Mario Kart or Bayonetta on PS4, a console which could then also play Far Cry, Dragon Age, Mordor, Wolfenstein and the rest of the GOTY top ten. The Wii U exists best as a supplemental system, and in a crowded market where a double console purchase is a hefty proposition, that’s not really a place you want to be.

Maybe I’m wrong. Maybe a handful of solid Nintendo games is enough for those who pick up a Wii U, and the console has moved 7M units to date (to PS4′s 13.5M, with a year’s head start). But for as much fun as my friends and I had while playing Nintendo’s best games these past few weeks, when I asked them if they’d think about buying a Wii U or swapping their PS4 or Xbox One for it, they said no. As much fun as the games were, there were just too few of them released too infrequently, and they were downright stunned when I told them the Wii U had now completely lost major franchises like Call of Duty and Madden altogether. A certain level of third party support was just assumed, but many may not realize how bad it’s gotten.

I hope that Nintendo pulls together to release some kind of Super Wii console that is the best of all possible worlds, but I’m not sure that they can survive another lackluster console like the Wii U, which is only classified has having “won” the year on the backs of its exclusives alone. But the hardware itself is behind the times and an unnecessary hindrance to a wider audience enjoying Nintendo games.

I’m not sure what 2015 will hold for Nintendo, but I do know Microsoft and Sony will be stepping up their exclusives game between Halo 5, Uncharted 4 and so on. As always, I want Nintendo to succeed, but I think they’re becoming further and further isolated in an industry that’s increasingly reliant on collaboration and finding as wide an audience as possible. I’m not sure hardware is required for that, when Nintendo’s greatest strengths are so clearly rooted in software.