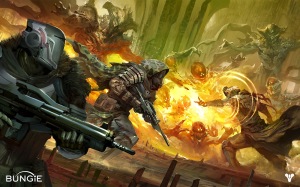 We are counting down the days towards the official launch of Destiny and unless you have been living in a cave with your eyes and ears closed, you may be wandering what all this Destiny hype is all about. So before the big launch, here is everything you need to know about Destiny to get you ready for battle.

Our Future Foretold in The Stars

Destiny is a first view shooter developed by Bungie, makers of the Halo series. The game is set to launch this coming Tuesday September 9th 2014. The history of Destiny starts seven hundred years into the future, on Earth’s last surviving city, housing the few remains of our golden era.

A gigantic, mysterious alien known as the Traveler looms above our planet, its origins are unknown, but what we have learned is the Traveler has been our protector since the invasion began. Its mysterious power and knowledge has helped us fight against a ruthless intergalactic force bent on eradicating our race.

Guardians are the last form of defense against these alien aggressors. Tasked with defending the few remaining humans left on Earth, Guardians must seek to find the mysterious power source of these cruel monsters and save the entire galaxy in the process.

Destiny is the first game in its kind to feature a shared world action adventure, shooter experience. The game puts you both in the seat of story narrator and main character. As one of three Guardian classes, (Hunter, Titan and Warlock) you will travel the galaxy battling to stop our extinction.

What makes Destiny such a unique and thrilling experience is that you don’t have to save the entire galaxy alone. Just like the recent Guardians of the Galaxy Movie by Marvel, working as a team with friends or other Guardians that appear in your games timeline is the true recipe for success – and although you can of course go it alone, Chuck Norris style. The added fun of taking down an alien strong hold as part of a 3 man fire team would be so much more fun and rewarding.

While you explore the outer-worlds of Mars, Venus and even the moon, Destiny’s online servers will seamlessly match your skill level with others who can help you conquer the invading forces. The game will also feature exclusive public events which you can choose to either join or not. Destiny will also include loads of co-op and multiplayer modes like, Clash, Skirmish, Salvage, Rumble Iron Banner, Combined Arms and Control.

Stay tuned for a full review of Destiny on our official website and Godspeed Guardians, Earth is counting on you.