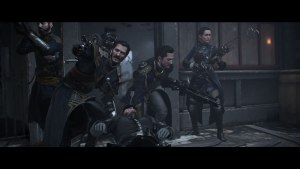 The Order: 1886 demo I played at PAX Prime was one of the stranger slices of a game I’ve played in quite some time. It managed to reel me in from the get-go and keep my attention until the very end, despite some deep gameplay flaws. Let’s start with the positives.

I don’t need to tell you that The Order is a gorgeous video game. The characters, setting, and lighting effects are all top-notch. The world is an interesting and unique setting that straddles a nice line between Victorian horror and alternate history. The idea of a game combining werewolves and Nikola Tesla is fantastic — I love the looking at a historical setting and playing with the idea of what it would be like with a dash of technology here and a bit of magic there. The few major events I was privy to inside of the world were equally intriguing. The voice work and banter between my team was great, and it was genuinely one of the few times where a game transitioned from a cinematic into gameplay, and I just sat there not moving because I didn’t spot the hard-cut from one to the other.

But sadly, as much as I really admired these aspects of The Order, the actual act of playing the game resonated far less with me. This certainly isn’t the first time we’ve had reservations about The Order’s gameplay. Once I did actually realize that I was in control of my character, I was thrust into a cover-based gunfight against a mob of enemies scattered across the levels of a nearby building. The sticky-cover system definitely feels like Gears of War, which is not a knock in my book. Epic really nailed that aspect, so there’s no reason to fix what isn’t broke. But while Gears had a great suite of weapons with some fantastic visual feedback when you made contact with an enemy, The Order’s arsenal felt like some really gorgeous prop guns.

My main weapon in the demo was the Thermite Rifle, a machine gun that also fired off explosive-flares. I loved the small detail of how the flare would corkscrew through the air on its way to my target, but igniting the explosive never gave me the desired effect. Blasts right on top of enemies didn’t seem to faze them, and certain explosions would cause structural damage while others seemed to just be bursts of light. So I instead decided to focus on picking them off with my rifle. The problem here was that the bullets spread out in such a wide area so quickly, that I could burst-fire an entire clip at an enemy across a street and have every single bullet miss its target.

Trying to pick off the seemingly-endless droves of enemies became a Sisyphean task until I switched over to my tiny pistol sidearm, which didn’t feel all-that great to use, but at least did a better job at dispatching the enemies. As I made my way through the town to my eventual destination, I couldn’t help but compare my progression to an early-’70s Disneyland attraction. Enemies would pop in and out of cover, but exhibited the lack-of awareness and sense of self-preservation of an animatronic. The feedback I received from a direct hit didn’t feel empowering, but rather like when your laser-sight would get close enough to a node in a shooting gallery.

The demo closed with a moment where my party barricaded themselves in decrepit building. I was told to wander around and search for any clues in the environment that might help lead us to safety. The first quiet moment of the demo, I was immediately shocked by how close the third-person camera remained behind my character. The space we were in was relatively small, but the lack of distance between me and my avatar led to a claustrophobic and disorientating effect, and not in a good way like what Bloodborne accomplished. I finally had a moment to soak in The Order’s world, and all I wanted was for it to be over.

Given how gorgeous The Order: 1886 is, I want to be able to explore its world. Given how well-defined its environment is, I want to enjoy parsing through every nook and cranny. Given how much I admire its character design and writing, I want to spend time unraveling its mysteries. I’m bummed out that the actual act of playing The Order seems to urge me away from what I want. Reading about the more horror-centric slice of the game that Colin got to play at E3 leaves me with a bit of hope that the demo I saw might not be representative of everything we’ll be playing in February. Here’s to hoping.